On request I added a nice little feature to Mapparium. It can now extract GPS informations saved in the EXIF of JPG photos. Usually smartphones and better cameras with GPS chips add them to the photos.
Really nice to remember where the photos are taken. a little preview of the image is included, sadly the JPG loading is very slow on MorphOS. I’m not sure whats the reason for this maybe some x86 optimization or general endian problem. So I decided to make the preview with a small preview of the image loaded and call MultiView to show the whole image on request. Mostly the small image is enough to have an idea whats on it. And with MultiView you can inspect in detail. Of course it would be nice to make it configurable later.

Little movie to show how it will work:


The GPS support will have to wait a version more I think, still need a lot of work, and if included track recording and so on should also be implemented, so still a lot of work.

Slow as a turtle

I got a question, if I will continue with my RSS reader I started a while before. So I searched for it, nice, it’s still on the backup 😛 and it still compiles. The home made HTML parser and print looks still strange, and the whole program is just a start. In fact I did this only to fiddle around with XML/Networking, tried some different RSS feeds all (in the list) seemed to work nicely. But to make a real usable program out of it, I was and I’m still too lazy :-P. And I also don’t think there is a real use for RSS today and every Browser has it already build in. So as an answer I’m not sure if I will ever continue it, Sorry. 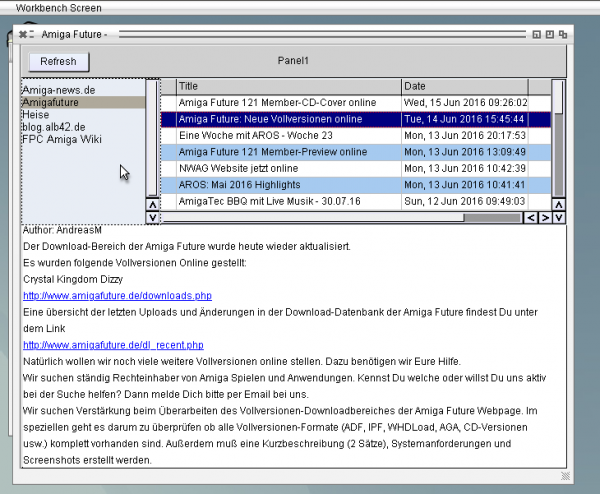 Show me the way

I got already some requests for easy route planning inside Mapparium, for me thats not so important, because mostly I just drive without a plan. But it’s funny to play around. In fact I plan both ways of planning, online search “from to” and manual planing by defining some points. But first make the online search, rather easy with “YOUR”. Sadly the by turn announcements are only supplied as text wit no relations to the route. That means you cannot click onto a announcement and zoom to the map where it should happen. I found another one from the university of Heidelberg, and it has map coordinates for every turn. But today when I tried to implement it’s offline :-O I’m a little bit hesitated to include such a service, if it is this unstable to use. Especially because it’s not just offline, but just lagging some minutes to timeout, which is very annoying, because it looks like the application is crashed. (But just waiting for the answer.)

Polluks wrote a little AREXX script to extract positions from JPG exif informations to show on the map, it also create geo: URIs suitable for Mapparium. He also asked me if it would be possible to include AREXX support directly to Mapparium. I always played with the idea to try some AREXX support things, but never had a reason. In principle is rather easy to get a message and return a error value.

I added two simple commands to Mapparium, goto and addwaypoint. 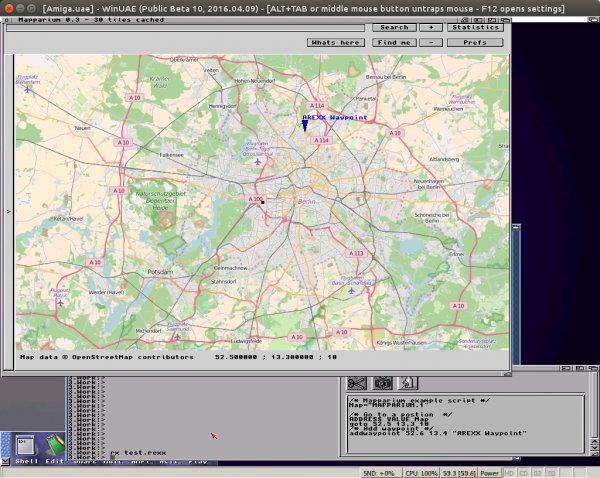 At AROS sadly I didn’t get the AREXX (or Regina) to work, thats the reason I implement for Amiga Classic at the moment.

Uh, there is the way

Implemented GPX reading and writing, really very easy. Tested with some of my cycle routes (I cuted the start away for the screenshot). It also saves the waypoints and tracks into a default.gpx to load at next start, its the easiest way to start. At the moment I draw a little rectangle at every track point and connect them with a line. Sadly it seems to be not possible to draw a thick line with the standard methods, the PenWidth and PenHeight in RastPort are ignored. so I guess this point approach works best for recorded tracks. For planed routes with little points its hard to see. Maybe I write an own line drawing routine, with Bresenham it should be possible to make.

OpenStreetMap with Waypoints and Tracks

Besides I increased the speed dramatically on drawing, on Amiga 68k its much faster now, even usable and resizing on MorphOS with less problems and much faster, it does not recalculate the complete image on every resize step, but only draws the image. 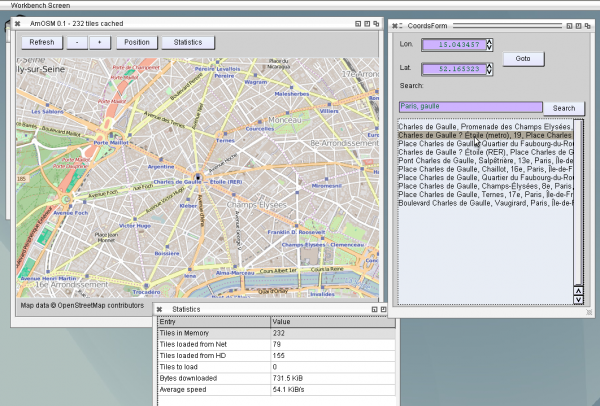 Playing around with OpenStreetMap. Of course one can use a browser (I guess it is working) but I want play around with images and network

Of course on a Next Generation Amiga it makes more fun:

New Version for the Virtual Lazarus crosscompiler, some crashes with mouse events (OnClick, OnMove, OnEnter, OnLeave), Redrawing and resizing problems and of course the biggest change adding support AmigaOS4 (PowerPC). I removed some not needed files and installations, so the download is much smaller this time.

I created a Release for the Free Pascal Compiler including RTL, Packages and a pre-alpha version of the Lazarus component Library.
For me the AmigaOS 4 implementation is considered as “done”. I will take care only that changes in FPC does not break the OS4 port and also the LCL changes not break OS4 compilation.

Download the Release Version at the FPC AmigaOS 4 Page.

I also uploaded the current archive to OS4Depot.net where it should be soon available for public use.

You can almost see me

As promised, I cared about drawing with alpha channel on m68k Amiga. Little bit background. When I make a StretchDraw() the raw data is scaled directly in pascal (to keep the alpha channel) via a nearest neighbor routine. And exactly there I need to touch every pixel to scale it, of course a good position to also care about the alpha channel. For speed optimization the special cases 0 and 255 alpha channel are handled separately. And its not so slow as I thought, so I let it inside.

Besides this I worked more on size calculations especially on MorphOS, still not completely sure how it should be. An additional problem appeared in the OS4 LCL. The size calculation as done before crashes, because it reads the Width/Height from the the MUI object which seems to be forbidden inside the Layout. If think about it’s not very surprising because the layout is called before the window is opened and to get the right size the Layout must be done. So I had to rewrite the section with AROS in mind of course. Seems it works now (again? I hope). With this changes the EdiSyn now also work on OS4. 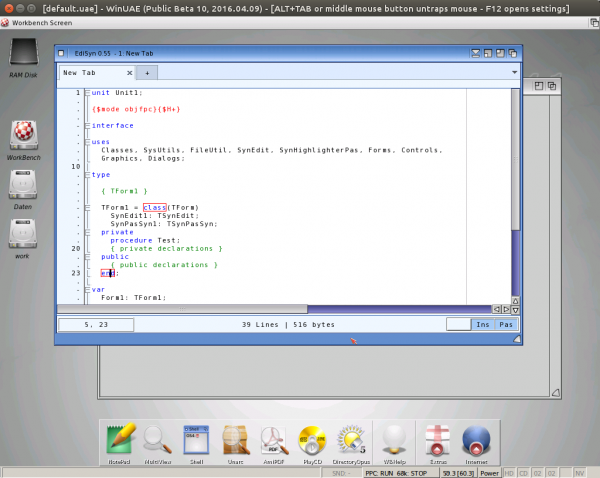