Due to multiple questions, yes it is possible to compile MCAmiga for 68000 as well, even it would still need AmigaOS3.x to work. But because I got some requests also to supply such a binary a made a separate archive for a Version for 68000, it’s not really tests, at least it starts:

But no promises about the function. It is rather slow but somehow usable.

Finished a little bit more MCAmiga testing, especially on MorphOS and AmigaOS4 there where some serious problems. On AmigaOS4 the device view did not work at all, just crashed, reason was a bug in the AmigaDOS unit of FreePascal. I fixed that exact problem already for other platforms, and now also on AmigaOS4. On MorphOS only tiny changes are needed, mostly related to the supplied lha being a little bit different than the one on classic, but still very close. AROS was a bigger problem, the lha command here is completely different, very limited actually, for example you cannot extract a single file.

I got a hint from Charlie to use cad to unpack archives, because it supports many different formats and it’s available for at least classic and MorphOS, I found out for AROS there is also a version in contrib, that means at least Icaros even comes automatically with it. AmigaOS4 seems not to have it, at least I did not find it. It works very nicely, easy to operate, but sadly it’s only for unpacking archives, no way to pack them. That means the functionality is limited to read only access in MCAmiga. Therefore I gave xad a lower priority over the native lha/lzx programs, except on AROS because there xad is the better choice, the native lha command does not work at all.

Besides that big feature for handling archives, I added a lot of small stuff, like Shift cursor keys to select file, or Ctrl cursor keys to jump fast up and down or to first item (left) or to last item (right). Start programs with enter and wait for finish or with Shift Enter an do not wait for it, so effectively start it in a new shell.

The Source is now also available on GitHub completely. I did put it there on the first release but I forget to push the changed source. I committed locally only. But now the full source should be there, so take it an improve it and most importantly have fun with it.

For now that is already a very useful program for me, more or less finished. I do not really need more than that, maybe one day one could add an editor to it, especially an hex editor. But at the moment I don’t need it.

Worked a little bit on the mouse control for MCAmiga, the mouse/video unit combination makes it very easy, exactly the same mechanisms than the keyboard events. So now you can also use the mouse to click on buttons or select files. The search and jump function was already included in the last version but I did not show them in a video, so I included them here.

The second part was to activate app window functionality, that you can drag and drop a file onto one of the two panels and the program will automatically jump to that directory and file. I did give me some headache though, because initially it did not work on Classic Amiga and MorphOS, and I found out that the FreePascal workbench unit had a big bug. The syscall offset of the needed Function AddAppWindowA was wrong. Now thats fixed as well.

Download as always for all Amiga systems on the programs page.

MCAmiga work continues, move now completely works (also with the fast move when source and destination are on the same harddisk). I build in a little text viewer also with hex display which I use very often, and for editor you can define yourself which editor you want to use, ed, editpad or what else you like. Already works very nicely and I use it frequently now, and hopefully that motivates me to improve it further. 😉

There where some little changes needed to make it compile for other Amiga Systems (AROS, MorphOS, AmigaOS4) but not serious changes, but I did not try them, so be careful when using it.

I guess there was some confusion about the installers I presented the last days… these are not official Releases of FreePascal 3.2. In fact FreePascal 3.2 is not released yet and also no fixed date for it yet.

My work on the installers just show my work preparing the next release that we have a real Amiga style installers with all needed Readme and copyright text that they can serve as official packages and even published on the official FreePascal site.

You can download these packages and test the installer, and that was the purpose of showing them, but please do not distribute them as FreePascal 3.2 releases. (I added also a beta marker at the page and in the ReadMe to make it clear) And do not post news messages about FreePascal 3.2 Release until there is an official announcement.

And as promised the Installer for MorphOS also to the latest Version. I used my old MacMini (with the acient MorphOS3.8) for that, but somehow it is rather slow. Maybe I’m spoiled with my PowerBook now, which feels much faster. But the MacMini is much better for such tries, not destroying my working setup on MorphOS.

As mentioned yesterday the 68k Amiga Installer needed a little bit more work, but now it is working nicely the same way as the other two.

In the video the customized Option selection is shown.

Next I will test the MorphOS installer again and try to make an own Installer for AROS. Thats a little bit tricky because of the Package system they use, which is nice but no support for it in the Installer as far as I can see. Path and assigns are not added to user-startup but should be made via a Package-Startup file, in the folder and a text file in the Envarc: pointing to this Package-Startup File. I did this already for the AROS install process but not with the Install tool.

The release of FreePascal 3.2 gets closer (at least I hope) and with it the first full Release of FPC with complete Support of all Amiga Systems. I created already an Amiga-Style Installer for Amiga OS3 and MorphOS.

Today I added a Installer for Amiga OS 4 which should work on all Amiga OS 4 systems (except the X5000, yes that problem still exists because we have no way to debug it, without such a system available)

I made a little video about the general installation of FreePascal on Amiga OS 4.1 Final Edition Update 1. It needs a reboot at the end, maybe one could add that to the Installer, but I don’t like that when Installers force reboots.

If you want to try out check the url in the Video: http://build.alb42.de

One disadvantage of writing a program relying on web resources is, that you have to update that program everytime the webresource is changed/updated. In the next days the search for MUIMapparium will break again, and the Find by IP/ Find me is broken a while before already.

So I updated MUIMapparium to Version 0.8 I also added some small new features, like some more shortcuts and also by popular demand to jump automatically to the first search result. Best update soon before the search function does not work anymore.

Also the 68k freepascal compiler got some updates which hopefully improve the stability and speed of the m68k-amiga Version. 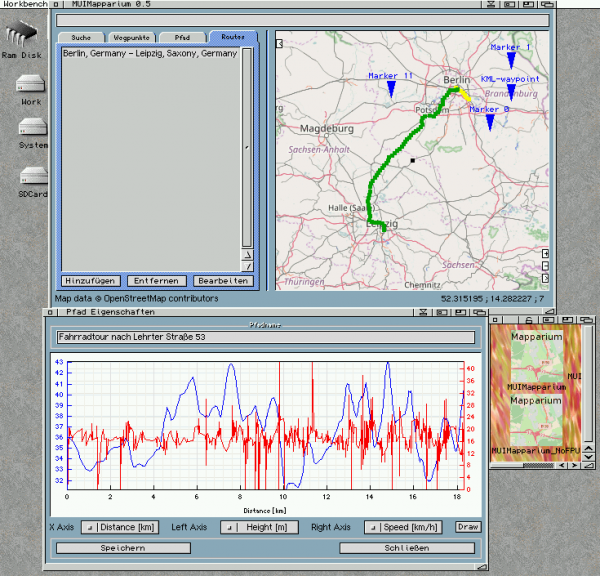