Activated the localization for MUIMapparium currently only for english and german (of course ;-)) implemented also the local library unit for AmigaOS4 so localization is available on all platforms.
I also activated the AREXX interface currently only two commands are implemented: goto lat lon [zoom] to jump to a position and addwaypoint lat lon „Name“ to create a waypoint. The Portname is the same as for Mapparium an example script can be found in rexx folder. The AREXX port does not work for AROS, Zune has no AREXX support currently.
I tried to compile it on AROS64 sadly the program did not work, it just freeze. Little bit strange sometimes it start but crash directly. I tried some other programs on AROS64 and they work rather nicely so why MUIMapparium not. The difference was easy it uses threads, finally I found the solution, the Critical Sections in FreePascal are mapped to SignalSemaphores of Amiga. In contrast to other OS the SignalSemaphores are not just simple pointers but a complicated structure. The given size there was ok for 32 bit Systems but for 64 bit the structure is much bigger. I included it for that release maybe someone want to try it 😉 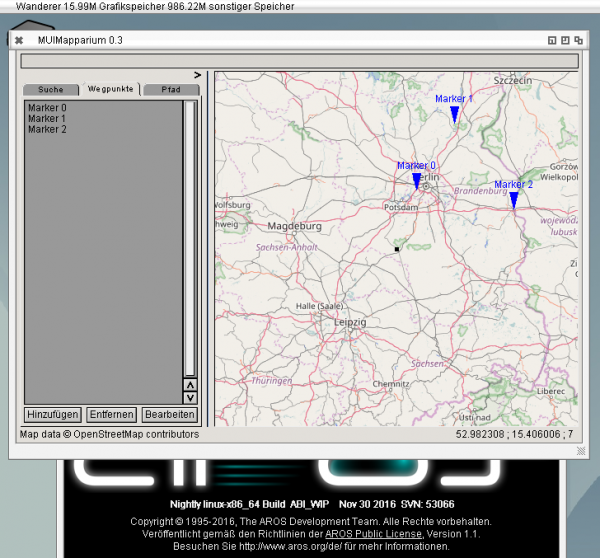