Native Amiga OS sadly does not have the Parent/Child window concept, which I need to implement fpGUI for it (every widget is an own Window). But the m68k AROS of course have this concept so it should be rather easy to bring it to at least a classic machine 😉 . I guessed it will be slow but I had no idea how slow 😛 the compilation of fpgui needs around 10 minutes (in my i386-aros some seconds, even my slow Server with Atom processor only needs around 10 seconds 😉 ).
The only „new“ thing I needs for AROS is the Parent/Child windows, which all reside in intuition unit. So I copied the intuition.pas of Amiga and copied the TWindow structure from AROS into (and renamed it to arosintuition). Some hlper function/constants are needed as well (NP_PARENT, to assign the parent on creation, IS_CHILD(), HAS_CHILD() function for status checking) and finished.
I had to deactivate some String things (mostly path/assign/drive checking, because they use BSTR)
And it worked on nearly the first try. 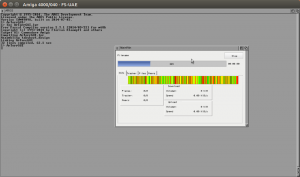 Problems appeared on Filerequesters, first of course because I did remove the BSTR2String conversion which was easy to reintroduce, but It seems the TDosList structure in Amiga unit is wrong, at Least I do not get the right output if using this one. I copied the one from AROS over, and it works. hmm maybe I have to check the original Amiga SDK, or some kind of alignment problem again?. The second problem in Filerequester was that the file were not visible… the height of every entry was something like one pixel 😐 strange problem. After a while testing of other programs I noticed that every picture is missing (in the screen shot there should be a picture on the Stop Button). SO I tried to trace back whats the problem, the BMP reading routine is just not Big endian compatible, its only little endian. SO I had to add some endianess conversion routines.
And finally it works and looks good.
The next logical step would be to try to compile LCL/Lazarus with m68k-aros and this fpGUI implementations as I did on i386. But BAD News from this side, this is not possible, and maybe it will be not possible soon. The problems appear from a rather unexpected side. LCL need resource Files, but this resources are not implemented for m68k-amiga and as long the file format is not ELF I’m not sure I can use the same resource compiler as for i386-aros, ok let’s say I’m rather sure I cannot use it ;-). That means LCL moves very far away for Amiga or even MorphOS, even I try again to implement a MUI-LCL interface.