During my vacation two new Versions of Vampire Cores are released. One (2.7.1) only adds more serial numbers so no actual core changes and the second (2.8) has some bugfixes. One Bugfix is called ‚- minor FPU fix‘, sadly no more information what that means. I heard the rounding issue is solved and MUIMapparium (FPU-Version) should work now, so let’s try that. 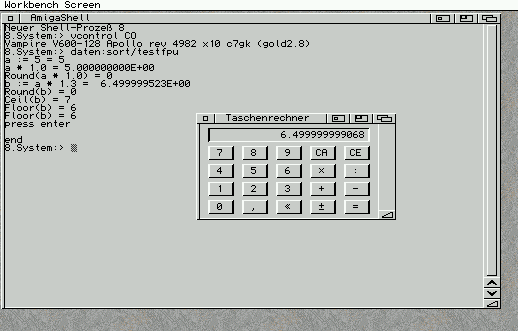 But sadly MUIMappaarium still shows nothing and that is because the rounding issue is still not solved in this core (as you see in the picture), also the the precision problem persists. So I’m not sure what they fixed in this version and what happened with the MUIMapparium fixes they showed before 🙁 More waiting.