Some time before I created a own MUI/Zune class with freepascal to check how this is done and if it opens the possibility for ownerdrawn things in LCL with MUI. It worked but then I put it aside and didn’t care much about, but now as I restarted the MUI Interface for LCL I got it out again and tried to implement.
It’s called LCLGroupClass and created with (MUI-)Group as Basis. In principle its just one difference, The MUIM_DRAW is handled by installing a clipping range and call the OnPaint Event of the connected Pascal object, which then send the paint message to the LCL-Component.
But this was only the half way to go, the paint message also must do something or I can not check if it work. So I traced back the Panel drawing routines to the basic platform dependant function to draw and implemented them to the LCL MUI interface: DrawText and Frame3D. First it looked very easy, espeically the text drawing… but it became tricky again because the GetClientRect routine also have to work properly. The Documentation is very thin about this things, mostly non-existing. But when trace back it become obvious that LCL is still a one-to-one conversation of VCL and hence of Win32 API. So the MSDN help, which is really good was very helpful to find the right way to implement the drawing functions. 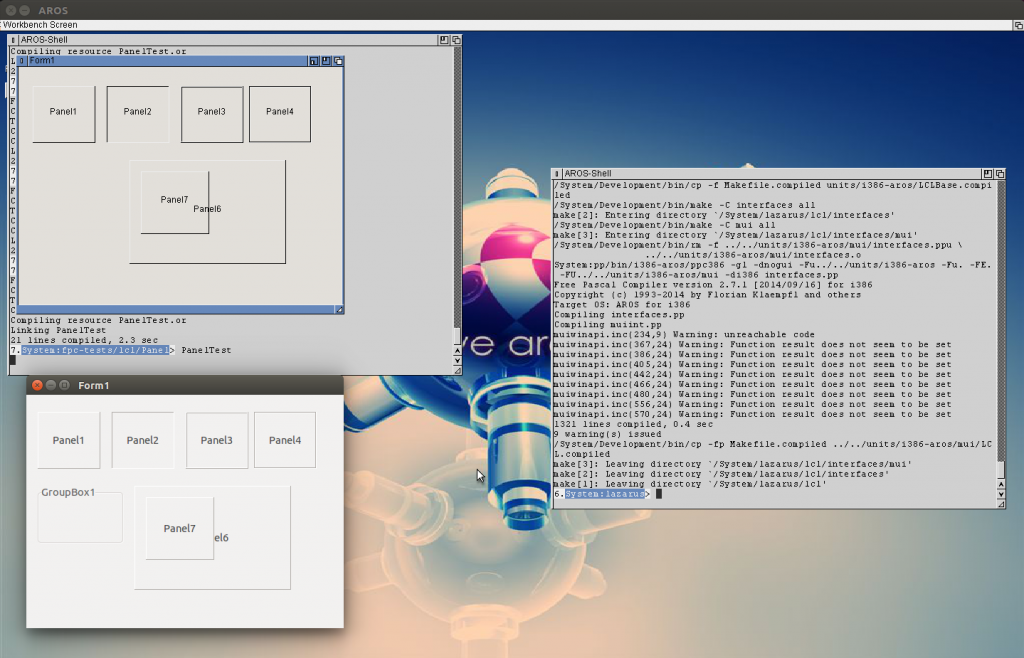 As you can see the normal Panel border look already very like the original (atm there is not color support so I just use black and white for the shadow/highlight color, Maybe later would be interresting to find out the MUI settings for shadow and highlight) and the Text is more or like in the middle of the panels.
The Panels are still completely transparent, I guess because I still didn’t implement the FillRect routine which is used for initial cleaning.
If this is done, I think I do not need to call the original MUI drawing routine anymore, just use the LCL drawing.