The image drawing in fpGUI was always a bad point, the routine to draw was simple and slow. I always planed to create a new one to increase the speed. This days I had time and mood to change it, so I introduced the cybergraphics unit to aros and wrote new routines to make the image drawing. Its much faster and much more elegant than before, especially the masked drawing does work now correctly. The old routine was juat a dirty hack to emulate transparent drawing.
The second point at fpGUI is the font handling. The strange thing is, there is a flag for bold and italic design if you load a font, but the most fonts only support the italic style. For bold style a second font is supplied which is named „fontname bold.font“ with various format, sometimes with space between words or minus sign or just without anything. My new font collector try to bring such cases together, try to identify fonts which belongs together, by name.

If noone reports errors or wishes for fpGUI, fpGUI is something like „done“ at the moment. Of course its not really done. But it is working very nicely and stable without big problems or limitations (except the displacement bug which I explained some weeks before and seems to be an AROS bug).

Which brings me to the third very big point, the LCL-MUI/Zune interface which I try to resurrect. I gave it up long time before because the zune, interface is/was so buggy and I didn’t saw a way how to continue. Now the Zune bounty is going and the ABIv0-on-trunk already has some Zune improvements. Some of them I already found. My development system is on a very old stage, but I also have a new sandbox to try… and for StringEdits I noticed a change already. The On Value changed event is fired now, in my development system not.
But still the LCL-MUI interface is in a very early stage, not much things working currently but I will continue to improve it continously. Maybe it will reach a usable level.

This means now you have two interfaces to choose for lcl programs, fpGUI or MUI/Zune, as long as the MUI/Zune is in such an early stage fpGUI will stay as the default. If you wish to test the MUI/Zune interface you can activate it by a compiler switch: „-dLCL_MUI“

As an example I compiled the Editortest, which I created long time before for a youtube video with both interfaces and started them. I changed the TextEditor.mcc background to easier identification of the MUI/Zune interface and as a proof that it does care about the global config. 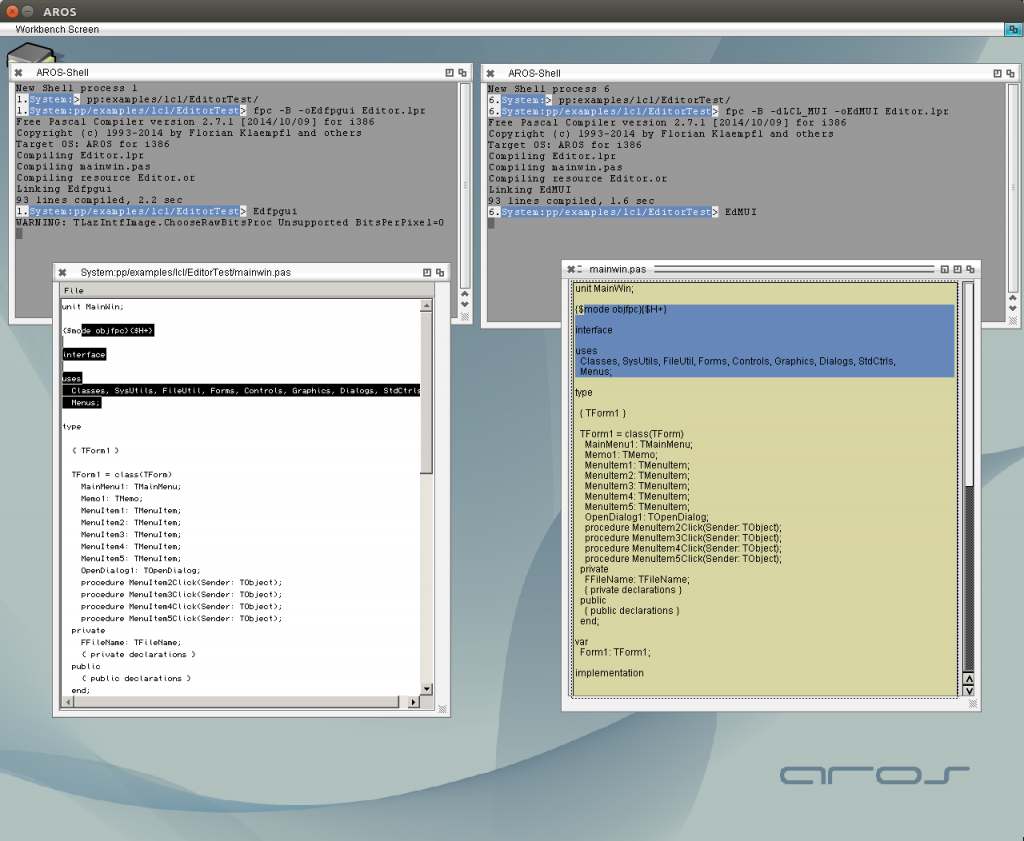 Please note that both compiled from the same source, the only difference is the compiler switch.

I put this all together and created a release of all this stuff, maybe someone has fun to play with it.