Charlie did an awesome job to add some more festures to the MorphOS (and Amiga) Freepascal compiler so FINALLY i was able to compile the LCL for MorphOS. I had to deactivate a lot of stuff for now, but all not very important. Some are expected to be a problem like the cybergraphics things… other more surprising for me like diskfont library which does not exists (the freepascal wrapper unit for it only, I guess)

But also other stuff I have to think about, especially, GetAttr, SetAttr, CallHook, maybe I make some wrapper functions to make it easier to handle them at all three platforms. It kept crashing all the time… of course bcause I forget AGAIN that you need to to Open the libraries for the needed units, there is the most interesting point, when to init because some initializations will need it. Finally I found the best position for now.

So it does not crash anymore but also does not open a window… seems my Hooks for MorphOS does not work well because the Layouthook is never called, and the Window open attribute does nothing. After deactivating the LayoutHook it at least start it does not care about the size, thats the reason the Button is full window size. I have the Hooks working in an separate MUI testprogram so I guess I just did something wrong in the LCL. So because the Hooks does not work even the close button does nothing in MorphOS.

So much work, so little time. 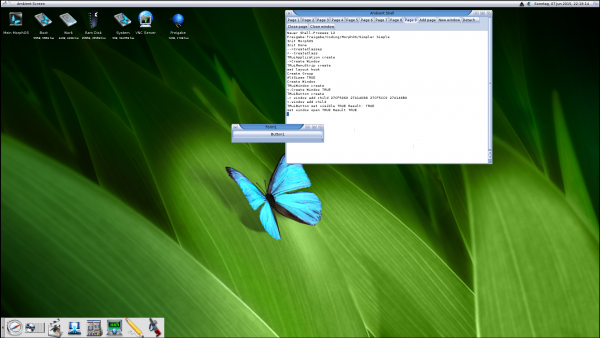