For TabWidth and so on in EdiSyn I need the spinedit, until now I always used a combobox or a TEdit, where I manually check if it is a Number. For me it is very interresting to make such a grouped object (Edit + two buttons) and it works really nice. So the main object is a horizontal group wich contains the edit and a vertical group with the two buttons. The outer group layout (Size/Position) is set by LCL but the Buttons and Edit is set by MUI self. 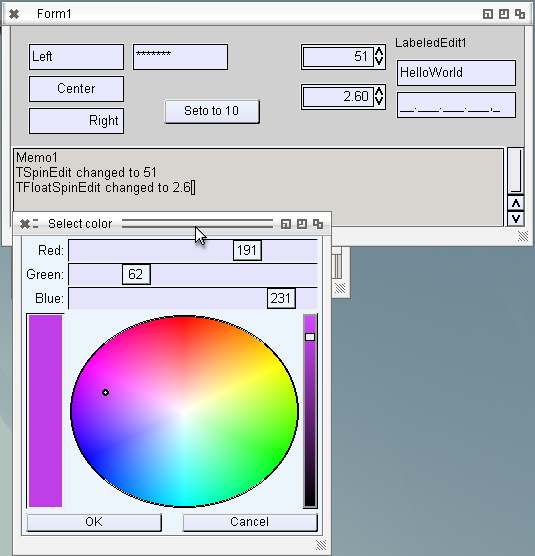 Rather straight forward actually, rather promising for further things. I’m thinking about to make the pagecontrol in the same way, so a Group with 2 other groups inside, one is the actual Pagecontrol with the different pages and the other one is the register with some fake childs just to show the registers. And if the number of pages change, the register just get destroyed and newly created with the new names (or on Pagename change). Just and idea…maybe an ownerdrawn register for the pagecontrol would be also possible. No hurry at this point, the ATTabs work very well.
I changed the colordialog from Palette to Coloradjust, now its exactly as I wanted to have, without the wasted space on the right side.